FFO is distributed as a ZIP file. No .EXE or .MSI installer is shipped with the product. The ZIP file contains 32-bit and 64-bit EXEs and DLLs, Visual C++ Runtimes, configuration files and web page content (HTML, images, Javascript files etc.). The top-level contents of the ZIP file are below. 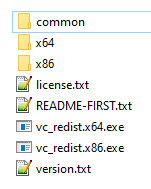 You would typically automate this process.

Ensure that Microsoft Windows is fully patched. All Windows updates should be applied.

The target installation folder (C:\Program Files\FireDaemon Fusion OEM) should now be as follows:

Open an elevated command prompt and type the following.

FFO should now be running and ready for login.

Installing FFO Alongside Other Versions of FireDaemon Fusion

The FFO command-line installation options can be used to customise your FFO installation. Here is an example:

The command-line options are case sensitive and are described below:

Simple FFO theme and brand changes can, to a limited extent, be achieved through careful modification of the fusion-oem-ui.css file that is stored in the \webapp\sstatic\css\ folder. Settings in this file will override the standard FireDaemon theme and brand settings upon start-up.

Alternatively, commercial services are available to FireDaemon customers who require FireDaemon Fusion or Fusion OEM to be re-themed or re-branded. For more information and pricing, please contact FireDaemon Sales and Support.

Note:  Copyright notices and version numbers cannot be modified or removed, nor can the registry keys or digital signatures of the executables be modified.

The following files should be minimally included in your installer or deployed on your platform. They must all reside in the same directory:

FFO also requires the Microsoft Visual C++ Runtime.  The Visual C++ runtime redistributable packages are included in the ZIP file or they can be downloaded directly from Microsoft.

The FireDaemon End User License Agreement allows the licensee to redistribute FFO royalty-free as part of a product or platform. It is prohibited for FFO to be redistributed or sold as a standalone product or to be made available for public download.